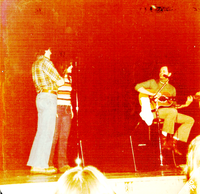 Taxi is a Harry Chapin song released on the Heads and Tales album. Taxi was his first hit and the song that launched his commercial success. Taxi peaked at 24 on the Billboard Hot 100 chart.

In performances without the band, Harry would frequently bring audience members on stage to sing the high part in Taxi.