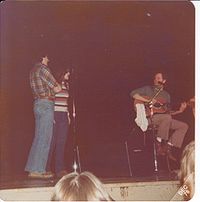 Harry performed two shows with brother Tom at the University of Illinois Auditorium on December 7, 1977. As was typical for concerts without the band, Harry invited fans on the stage to sing the high part in Taxi. About a dozen fans brought birthday cards and place them on Harry's stool on the stage before the concert. Tom also fell off his stool while performing causing stage crew to rush to his rescue; moments later he was back performing.

The low-quality photos were taken with a Kodak Instamatic camera.